My students work on diverse systems and you should refer to their pages for details.  Below, I summarize some of my major current and recent projects.

Settlement shadows and habitat landscapes.  Since our earlier work on artificial reefs (Osenberg et al. 2002), we've explored how habitat configuration can influence the settlement of reef fishes and invertebrates to coral colonies or the oviposition of mosquitoes to aquatic patches.   In part, we evaluated the Field of Dreams Hypothesis vs. the Propagule Redirection Hypothesis (Stier and Osenberg 2010, Hamman et al. 2018, Briggs and Osenberg 2019): e.g., we've quantified settlement in reef fish when we've added habitat patches.  This can alter the production of habitat-dependent organisms in two contrasting ways: (1) by enhancing input of new colonists to the new sites (the Field-of-Dreams Hypothesis); and (2) by drawing colonists away from existing sites (the Propagule Redirection Hypothesis).  The latter does not add new colonists to the site, but because it redistributes them, it can increase regional density by reducing the deleterious effects of density.  Our previous research (Stier and Osenberg 2010) showed that local reefs without neighboring reefs received two to four times more settlers than reefs with adjacent habitat, demonstrating that increased habitat redirected larval fish. At the scale of the entire reef array, total colonization increased only 1.3-fold despite a 6-fold increase in reef area. Thus, propagules were both increased and redirected, a result intermediate to the Field-of-Dreams and Propagule Redirection Hypotheses.  We also used a spatial model of fish dynamics to explore the role of propagule redirection and subsequent density-dependent survival in these fishes -- the primary effect of new habitat was to ameliorate competition at existing sites rather than increase colonization at the new sites.  Our new work (our recent NSF grant with Adrian Stier, Elizabeth Hamman, and Scott McKinley) focuses on fieldwork and dynamic models that: 1) incorporate long-term, multi-cohort dynamics; 2) examine the effects of spatial patterns of habitat on the spatial patterns of colonists; and 3) quantify the feedbacks between the colonists and the habitat (e.g., to incorporate both positive and negative effects of coral occupants on coral growth).  I'm also keen to expand our work in coral reefs to mosquitoes and their aquatic systems, where our initial research suggests that redirection pays a relatively minor role in driving oviposition patterns (Briggs and Osenberg 2019).  Ultimately, I hope to integrate these concepts with our work on cryptic density dependence (Shima and Osenberg 2003, 2015) to better understand spatial dynamics of aquatic networks linked through mosquito dynamics. 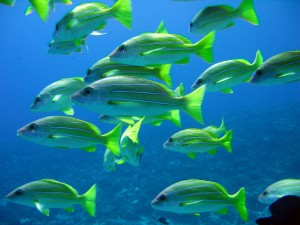 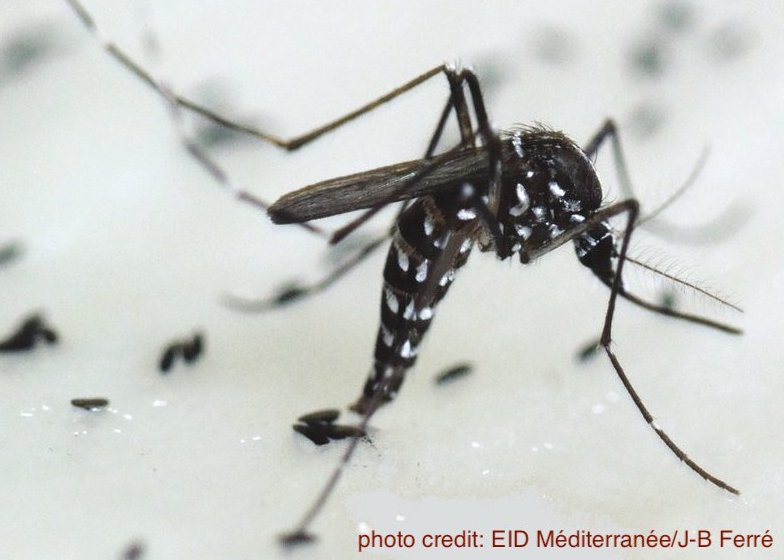 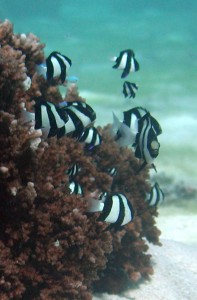 Reef Fish Ecology.  Much of my work focuses on recruitment processes, density-dependence and size-structure in reef fishes.  A portion of our work synthesized existing studies using meta-analysis and have extended mathematical models of recruitment processes in fishes.  This work was sponsored, in part, by our project on marine ornamentals (see below), by the National Center for Ecological Analysis and Synthesis (in Santa Barbara, California), and by NSF.  We also investigate the efficacy of marine reserves and alternative management practices (both by using mathematical and statistical models; and by conducting empirical studies).  A portion of this work was based in Moorea, French Polynesia.  The NSF work was built around our work on cryptic density dependence (sensu Wilson and Osenberg 2002, Shima and Osenberg 2003, 2015).

Meta-analysis in Ecology.  Meta-analysis is an important synthetic tool in ecology, yet a wide range of issues continue to constrain it's application in our discipline.  Our recent NSF grant (with Jim Bence and Scott Peacor, and including post-doc Chao Song and graduate student Amy Briggs) focused on evaluating different meta-analytic methods as applied to ecological data.  As part of this project, we also have developed modules to help introduce students and researchers to the key issues in using meta-analysis in ecology. Those modules will be available publicly as soon as our current manuscripts are accepted (to avoid copyright issues).   While my core interest remains the use of appropriate metrics of effect size (stemming from my early work: Osenberg et al. 1997, 1999, 2002), our recent work has focused more on statistical issues (e.g., Hamman et al. 2018, Pappalardo et al. 2020, Song et al. 2020). 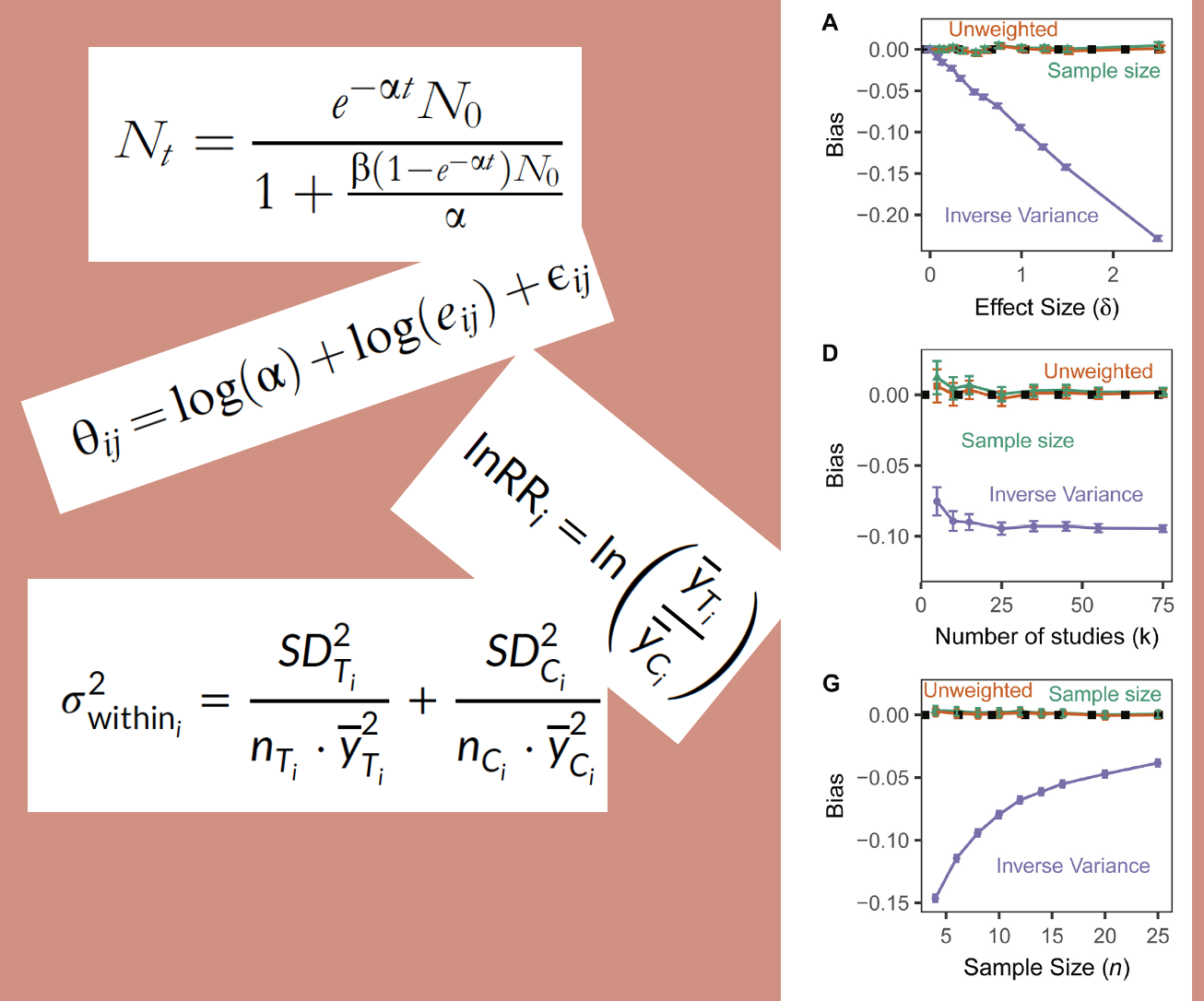 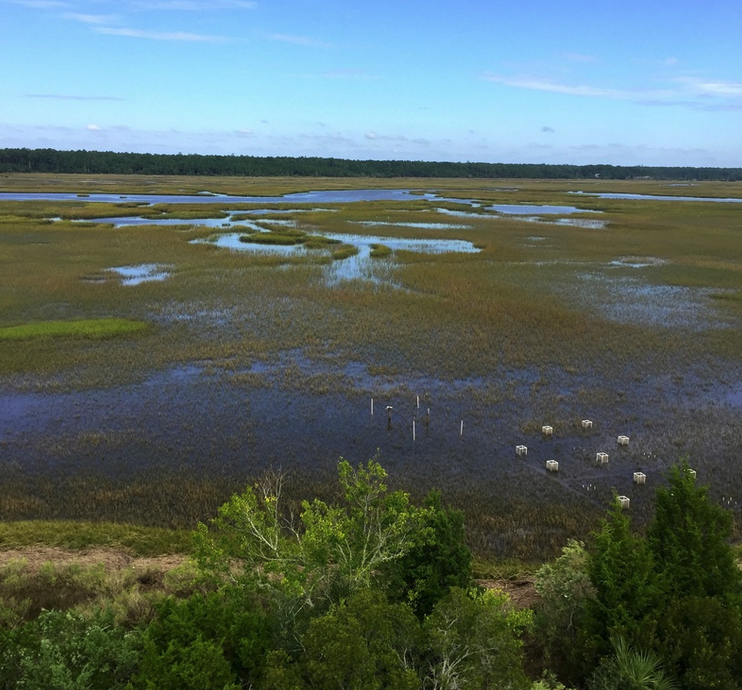 Marsh Ecology.  Several of my students (led by Rebecca Atkins) have worked on salt marshes along the east coast of the US, including Sapelo Island, home of the Georgia Coastal Ecosystem LTER.  Our research focuses on the marsh periwinkle, Littoraria irrorata, and the marsh plant, Spartina alterniflora, including projects investigating: 1) local and regional variation in the density and size-structure of Littoraria; 2) latitudinal variation in the effect of Littoraria on Spartina biomass, density, and shoot traits; 3) effects of temperature and body size on respiration and feeding in Littoraria; and 4) the development and deployment of biomimics to quantify small scale spatial and temporal variation in body temperatures of marsh invertebrates (including snails, oysters, and mussels).  This work was sponsored, in part, by NSF via the GCE LTER project.

Vermetid - Coral - Fish Interactions.  During our work on reef fish in Moorea, we discovered that sessile, vermetid gastropods (see picture to the right) can have large deleterious effects on coral growth and survival.  Our ongoing work is exploring the mechanisms and consequences of these effects, and was a major focus of my recent research in the Indo-Pacific.  This work was collaborative with Jeff Shima (Victoria University of Wellington, New Zealand) and Tom Frazer (UF) and it also involved many of my past graduate students, especially Anya Brown.  During this project, we discovered that muricid snails consume vermetids and then lay eggs in the empty tubes (Brown et al. 2014, 2019).  We also explored the mechanisms underlying the effects of vermetids on corals, including effects on the coral microbiome (Brown and Osenberg 2018, Brown et al. 2019).  And we also documented a mass mortality of Ceraesignum maximum -- whose populations were completed extirpated in Moorea (complete mortality in < 1month) and most other islands in French Polynesia. 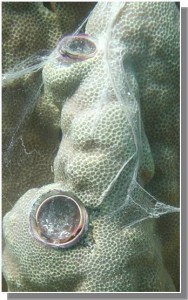 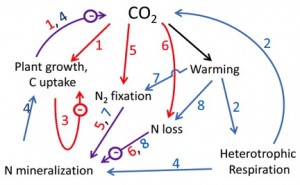 Soil C dynamics.   Working with a diversity of colleagues (led by Bruce Hungate at NAU, and joined by Kees-Jan van Groenigen, Natasja van Gestel, Jeff Dukes, Yiqi Luo, and Kiona Ogle), we used meta-analysis to understand soil C dynamics under climate change.  My involvement was primarily through my expertise in meta-analysis (and not biogeochemistry!).

Marine Ornamentals.  Our project was designed to quantify the effect of density-dependence in reef fishes, estimate migration rates among, and settlement to, different habitats, explore relationships between benthic habitat characteristics and reef fish abundance, elaborate upon statistical aspects of the BACIPS assessment design, and model fish population dynamics. Our work helped elaborate upon the attraction-production hypothesis, and was designed to improve information that guides the management of the marine ornamental fishery (i.e., fishes harvested in the marine aquarium trade). Fieldwork was located in the Florida Keys, and the project supported a post-doc and a graduate student.  PI's: Craig Osenberg, Colette St. Mary, Ben Bolker; Post-doc: Laurent Vigliola.

Restoration ecology of macrophytes in freshwater springs. Our two-year research project (now complete) was designed to understand the ecological factors influencing the dynamics and regeneration of Vallisneria in freshwater springs. Results were intended to guide restoration efforts being conducted by the Southwest Florida Water Management District. Fieldwork was conducted in Kings Bay in the upper Crystal River; lab work was conducted at the University of Florida. Field studies used experimental and observation approaches to quantify effects of herbivory demographic parameters for use in a stage-structured population dynamics model. The project supported a post-doc, a tech, and a graduate student.  PI's: Tom Frazer, Craig Osenberg; Post-doc: Jennifer Hauxwell.

Phenotypic plasticity in sunfishes.  Much of my past work has focused on stage-structured interactions among sunfishes and has also explored causes and implications of variation in their feeding morphology.  Several of my students also worked on phenotypic plasticity, but in other aquatic systems (e.g., tadpoles).  My older work on sunfish (collaborative with Peter Wainwright, Gary Mittelbach, and Casey Huckins) was designed to engineer different phenotypes (by exploiting phenotypic plasticity in jaw morphology), develop and test biomechanical models of molluscivory, to compare patterns of diet and morphology within the sunfish clade, and explore the implications of these findings to the evolution of molluscivory and phenotypic plasticity and the ecological significance with respect to predator-prey and competitive interactions.  I have not worked in this area for quite a while, but I am very keen to attract a graduate student who would be interested in working in this or related areas.