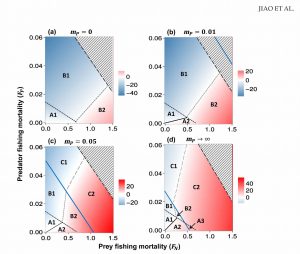 Jing’s paper on movement and its effect on trophic cascades inside marine protected areas was just published online in Ecosphere.

The protection of predators inside marine reserves is expected to generate trophic cascades with predator density increasing but prey density decreasing; however, predators and prey often both increase inside reserves. This mismatch between the expected and observed change in prey density has been explained because prey also are harvested; that is, the protection of prey compensates for the additional predation inside the reserve. Here, we show that this mechanism alone cannot increase densities of predator and prey; other mechanisms are required, and we hypothesized that movement of predator and/or prey might provide such a mechanism. We therefore built two spatially implicit two-patch predator–prey models with movement of predator and prey between reserve and fishing grounds. We show that post-settlement movement of predators (but not prey) altered the strength of trophic cascades and could increase densities of both predator and focal prey. We further built a more general model that shows that predator post-settlement movement can reinforce and even supplement the effect of two previously investigated mechanisms producing trophic cascades: a prey size refuge and predator density-dependent mortality. Our study increases understanding of mechanisms that can alter the strength (and direction) of prey responses inside marine reserves and highlights the importance of movement in human-induced heterogeneous systems.